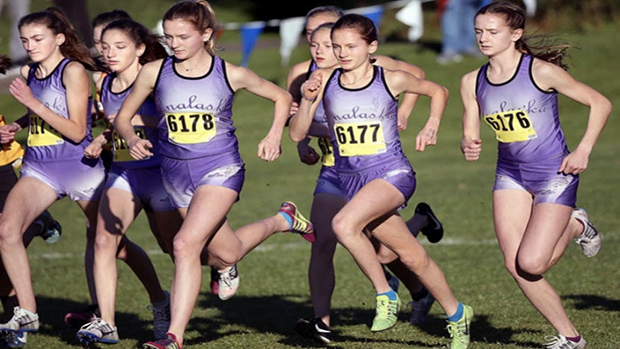 Onalaska's Kora Malecek finished the 2019 cross country season with a state championship, a course record of 17:44.60 and a trip to Team Cross Country Nationals.

In this Q&A, we talk with Kora about her love for running, her constant drive to get better, and goals for the season and beyond.

MileSplit WI: Can you think back to a race or practice or run when you knew you were going to be successful?

Kora Malacek: Going into my freshman year of high school I had absolutely no idea what I'd be able to do. I was like, well my sisters are going out and training every day, so if they were doing it, I was going to do it. Then I made varsity my freshman year and thought, "oh, well that's awesome, I want to keep doing that." Personally, I think the biggest thing I like about the sport is improvement. To me it's not so much about winning as it is just wanting to improve my times every year and become a better runner.

MileSplit WI: And you said your sisters also run? What's it like to compete with them?

Kora Malacek: Yeah, they run too. It's fun, we all kind of have our own events. Amalia does the mile and she's the state champ in that, Lydia does the 800M and she got second in the state, and then I do the 3200M, so it's nice, especially during the track season. Cross country's different because we're all running at the same time, so I can't really turn around and be like "good job guys!" But it's fun in track because I get to watch them and cheer them on which is something I don't get to do often.

MileSplit WI: What would you say your biggest key to success is? Is it really just that personal drive to improve?

Kora Malacek: Yeah, I think so. I think the biggest thing for me is that I really do love running. Regardless of whether we have a season or not this year, I'm still going to run. I think even if I wasn't a competitive runner I would still love running because it's still something I want to do every day. Like I wake up and I get excited for when I get to see my team or if I get to go out and find a new pretty spot to run. I love running and I also like working hard at it, because I think most of my success really has come from hard work. I wouldn't necessarily see myself as the most naturally talented runner, but I always think, "well, I'm gonna get at it until it works out."

MileSplit WI: I'm not sure what your season looks like right now, but do you have any races to look forward to soon?

Kora Malacek: I have no idea - it kind of depends on what our school district says at this point. We thought we'd have September to race, but school moved online, so we'll just have to wait and see how it goes. I'm kind of approaching this season like, if we race we race, but I'll be ready emotionally if we don't.

MileSplit WI: So that said, what's your biggest goal going into this season? You won state last year, so where do you go from there?

Kora Malacek: I think my biggest goal, going back to what I said earlier, is to keep improving. Like I want to re-break the course record at the state meet again this year - that's the biggest thing for me. But I also really want my team to win state with me, because that's a goal we've had since our freshman year. We have the potential to do it if we work hard and everything falls into place. We've got other teams in the state like Muskego - they're an awesome team, they made nationals - so that gets us excited. If we're able to stack up against them and win the state championship this year, that puts us in a really great place.

MileSplit WI: Have you been able to train with your team at all this summer?

Kora Malacek: We can't meet as a team like normal right now, but that can start on Monday. It's been kind of weird, but personally, I've been feeling like my training's going fine. I just started building back into it after a kind of extended track season because I did the WISCO Mile. I took a two week break and now I'm working back into it with my sisters. Our goal for the season is always to run our best races at the end of the year, so I feel good about where I'm at right now in terms of training.

MileSplit WI: What has a typical training week looked like for you?

Kora Malacek: Generally, going into the cross country season it's mostly base stuff with some aerobic runs, and we had one longer run this past week. It changes week by week as we go. It's kind of doing the best you can without gyms open to lift. The nice thing about running is you can do the majority of the sport outside.

MileSplit WI: Is there a cross country race that sticks out in your mind as your favorite?

Kora Malacek: I definitely think my favorite race was State this past year. I feel like I generally tend to race a bit stupid and get out a little bit ahead of myself, I need to work on being more consistent. But State was a race where I got out and felt controlled the whole time. I never felt like I was over-exerting myself or gutting it out to finish, it was a race where I finished and actually felt like I had more in the tank. And so I think it was my favorite race because I was smart about it, and it was just a fun memory too with getting second in state as a team. We all got to celebrate afterwards, it was just a really good day.

MileSplit WI: Do you have any big interests outside of running?

Kora Malcek: My Instagram will show a lot of this - I raise quail. I have quail in my yard right now, and they're my favorite things ever. I want to go into pre-vet medicine, so for a school project I decided to raise quail and I kind of became obsessed with it. I plan on doing more of that in the future.

MileSplit WI: I'll have to go check that out! So speaking of plans after high school, do you plan to continue running?

Kora Malacek: Yeah, I definitely want to run in college! Right now I'm looking at a couple schools that I'd be interested in going to. I want to go with my sisters, so we're looking together. It's an interesting process during coronavirus, but I'm excited for the future. I'm just trying to take it day by day.

MileSplit WI: Well thanks for taking the time to talk with us today! Hopefully we can see you out at some meets this fall!