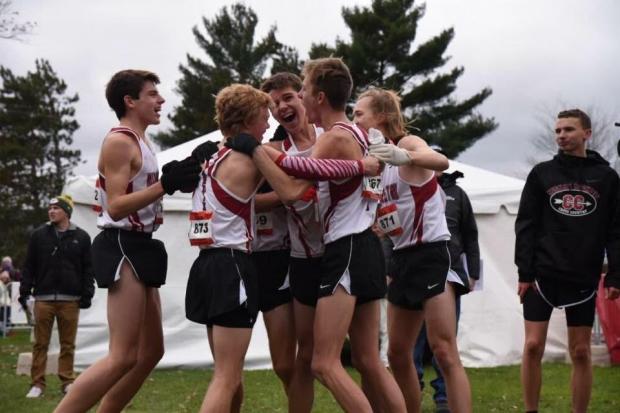 We are fortunate to have Caleb Easton, a junior at Middleton High School, take time from his busy schedule to share a little bit about his running experiences, as well as his goals for this track and field season.

This past fall, Caleb Easton led the Middleton Cross Country Team to a state title and Nike XC Nationals (NXN) team qualification.  He finished 8th overall (16:02) at the WIAA State Championships to help his team accumulate an impressive team total of 76 points, which put a gap on 2nd place (Stevens Point) by 101 total points.  As impressive as this individual and team performance were, the Middleton boys were still focused on their season goal of making it to the NXN Meet.  A few weeks later at the NXN Heartland Regional, the Middleton boys accomplished that goal by finishing 2nd overall to get an automatic qualifier for the national meet in Portland.  Caleb, once again, led the charge at the qualifier with a 20th place finish and an impressive time of 15:26.

Caleb brings a constant energy and leadership that helps fuel Middleton's success.  This past fall, he kept the team focused on what they would need to do to accomplish their lofty goals.  His teammates have responded to his leadership, and are often found finishing within seconds of Caleb.  This special group of distance runners, led by Caleb Easton, looks to build off of their successful cross country season as they head into the beginning of a new track and field season.  The below interview let's us learn a little more about Caleb's running experiences thus far. 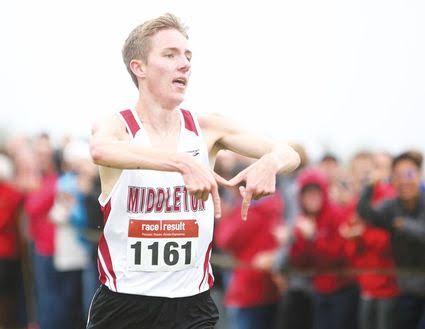 Q: What sports did you grow up playing, and when did cross country and track become your focus?

A: Growing up I was always pretty active in playing a variety of sports with my friends, my two main ones being basketball and soccer. I played soccer up until middle school and played basketball through my freshman year. From what I can remember, I really became interested in running in middle school. We ran the mile in gym class multiple times, and I went out for our track team and enjoyed it a lot. I would say after freshman year I really became invested and focused on running. I worked pretty hard my freshman year, but it was after my freshman year when I realized that running was something I really wanted to work hard at.

Q: Tell us a little about the teammates, coaches and other mentors that have helped you in your life.

A: I definitely have a lot of people that support me in my activities whether they are running or other things in life. My freshman year I really looked up to two guys on our team, Gus Newcomb and Perrin Hagge. Both Gus and Perrin are very dedicated runners and they really showed me how to work hard. I can remember watching Gus and Perrin finishing 3rd and 1st in the 1600m at the state track meet my freshman year, and that moment really inspired me to try and be like them one day. My coach Brian Finnel is another big mentor in my life. Aside from the running and workouts that he does with me, Finnel has become a very close friend of mine that I can always go to. He believes in the team more than anyone and does whatever he can to ensure we are in the right position to compete.

Q: Do you have any other runners (college, professional, other high school) you admire or feel motivated by?

A: In middle school my absolute favorite runner was Alan Webb. I can remember watching his high school mile record over and over again on Youtube. He is really inspiring to me due to what he was capable of doing on the track at such a young age. I have quite a few other runners that I really admire their work ethic and style including Gabe Jennings, Galen Rupp, Chris Solinsky, and Matthew Centrowitz.

Q: This past fall was very successful for you and the team. Did you guys have any setbacks or difficult moments, and if so how did you overcome them?

A: I was really proud of my team this past fall because we all worked very hard and believed in ourselves and each other, which I really think was the most important part of the season. That being said, we definitely faced our share of setbacks as most teams do. We had a few injuries throughout the season, one being Jack Rader's achilles that he hurt the previous spring. Jack stayed persistent and kept cross training hard and was eventually able to race for us at the end of the season which was super cool. Aside from that, most of the guys on the team got sick at times throughout the season, including myself around the state meet. With the sickness I think the big key was that we still gave it our all in workouts and races, even when we weren't feeling the best.

Q: The 2018 track season is here after a shorter off season for you guys. What goals do you have for this season?  What event do you most enjoy competing in?

A: All of the guys on our team have been getting really excited for the track season and trying to reach their goals that they set for themselves this past summer. Personally, I am focusing on the state meet. Last year I barely slid into qualifying for the 1600m, but unfortunately tweaked my SI joint in my lower back the day before my race, so I struggled a bit to complete it. That being said, I really want to redeem myself at the state meet this year.

My favorite event currently is the 1600m. I really love the 16 because it's the perfect mixture of strength and speed. This season I am looking forward to branching out and running the 800m and the 3200m a bit more too.

Q: Tell us about a memorable workout. (ex. Crushed it, ran through thunderstorm, somebody threw up etc.)

A: Wow, this is definitely a tough one, it brings a lot of funny memories to mind. The guys on our team really love to have fun with the training. Although we work hard, we like to joke around a bit, but I think overall this makes the training a lot more bearable. From this past season, I can remember one workout in particular that I was super happy about. It was about a week or so before Nike Cross Regionals and I was running a workout with Jack Rader that consisted of 1 mile a bit faster than 5k pace, a 2 mile tempo, and then a 1200 at the same pace as the first rep. Jack and I crushed the workout, and I can just remember how happy we were because he was finally recovering from his achilles injury and I was finally getting over my illness that I had for a couple weeks at the state meet. I would say we gained a lot of confidence that day that carried over to the race in Sioux Falls.

Q: Do you have any pre-race superstitions? What do you do to stay relaxed and ready?

A: Last track season I would eat pesto cavatappi from Noodles & Company the night before every race and that was a pretty tasty routine I used to do. This year in cross country I started to recite my favorite bible verse, Philippians 4:13, in my head a few seconds before the start of each race. In terms of staying relaxed, it's actually pretty funny because I used to be just about the most anxious, nervous person on the team. This year I was a lot more calm before races. To stay relaxed I would often look back on my training before racing, and I think that gave me a lot of confidence and reassured me that I was in a good place.

Q: What advice would you give to a first year runner?

A: I think this one is really important and it's something I wished I realized when I was a freshman and sophomore. I personally think that the biggest piece of advice I can give is to not limit yourself because you are younger than most of the people you are racing and training with. If you look at the best underclassmen runners, they aren't afraid to work hard, they don't "wait for their time to come." They train hard and put themselves in the position to compete and win. Although steady progression is definitely important in running, I think getting serious about setting routines in training and taking some chances in racing is really beneficial.

Q: What is your favorite subject in school?

A: I really enjoy my physics class and my businesses classes.

Q: What is your favorite hobby outside of running?

A: Outside of running, I enjoy hanging out with friends quite a bit. In the summer we spend a lot of time outside swimming, biking, playing spikeball, and walking in downtown Madison. My family and I also visit our cabin often, and we have a lot of fun up there too.

Q: Who stars as Caleb Easton in a movie?

A: Any scrawny kid that likes to run and has a few good jokes. (Or my teammate Braedon Gilles)
Tweets by